While the data this month looks weak, I think there is more to the story. My hypothesis is speculative in nature, so I will save it for the end after going through the data.

Delivery volume in December has begun. On the first day of delivery, 6,195 contracts were delivered. As the chart below shows, there are still 12,730 contracts remaining in open interest (purple bar). This December had the weakest open interest on first notice all year at 18,925 (green bar). The chart below shows that December had been below trend for most of the contract, so it was not a surprise that it ended slightly weaker. What’s more surprising is how weak December was in general. December is typically one of the strongest months of the year, with last December starting First Notice with 31.5k contracts.

Given the strength in gold the last few weeks it is odd that December would cap the year off with the weakest finish of any major month, including October. The bank house accounts have been quieter in recent months, though BofA continues to be one of the major participants, this time taking delivery of gold (595 contracts) after delivering 1,762 contracts in November. Although delivery volume has dipped slightly, the extraction of metal from the vaults continues. The chart below shows the total net daily change from the chart above. As can be seen, almost all increases in the chart above are just instances of metal changing between Registered and Eligible. Over the last 104 days, there have only been 8 total days of metal being net added to Comex vaults and zero since Oct 21st.

The Comex has lost 9.5M ounces of gold since July 1st. Why are the Comex vaults unable to replace this inventory? As a percentage of Registered, it shows a position that is more middle of the pack, but still not anything noteworthy. Again, this is surprising given recent trends. If you notice above, the gray line in the chart was this past November. November had incredible strength coming into First Notice.

The analysis last month guessed we could see high, mid-month delivery volume. Net new contracts started strong, but then completely flat-lined after a few days. Furthermore, shorts waited to deliver gold up until the very end of the contract. This led to November delivery volume being elevated but not setting records as shown below. There is significant contango in the Futures market which has made the spot/futures spread the widest it has been since August 2020 when the gold market was taking off. I have highlighted recently how delivery activity in silver on the Comex is getting smaller even while metal leaving the vault continues unabated. That trend continues again as shown below. Heading into the close, silver was already trending below recent months and finished on a relatively weak note. Even with 2,833 contracts remaining open (gray bar), this month will still be very small. The open interest in First Position (green bar – 4,648) was the second weakest going back to September 2021. It was only ahead of July 2022, even though July is also typically a strong month. It came in less than half of last December, which had 9,484. The bank house accounts have shown up again after being very quiet the last two months. BofA is still on the sidelines after delivering 5,013 contracts in September. As mentioned above, this relative quietness is all happening despite record outflows from Comex vaults. With 1M ounces leaving Registered yesterday, the total Registered exodus since July 1st is 35.2M. Considering that only 34M ounces remain in Registered, if the last 5 months repeat the Comex will be out of Registered silver. Silver for January is actually showing signs of life. It currently only sits below January 2022 and October 2021. When the chart is plotted as a percentage of Registered, you can actually see that this month is a massive standout and is surging upwards. If the momentum holds, this would be a big change in trend from recent minor months that have seen delivery volume plummet. Unlike gold, the spot to futures market has been mostly in backwardation for several months. After rising out of backwardation for most of November, spot prices have once again jumped ahead of futures prices in recent days. Finally, we turn to Palladium where December is a major month. Not much to see here honestly, 98 contracts have been delivered so far with 37 remaining in open interest. The dive into the close was in line with previous months. This is mainly driven by the fact that Registered palladium has not seen the same exodus as has happened in gold, silver, and platinum. Okay, time to put the speculator hat on. Let’s step back…

In 2021 silver delivery volume was off the charts. In February 2022, it looked like the Comex was about to see significant delivery volume and then all of a sudden there was a massive adjustment to the data that was 12 standard deviations above average. Since then, delivery volume has completely fallen off a cliff, but silver leaving the Registered category (metal available for delivery) has skyrocketed.

Gold took a different path, seeing sustained delivery volume throughout the year. Heading into November, the open interest took a major turn higher and looked like it could set a new minor month record. Net new contract delivery started strong and then flat-lined. Now December comes, typically a very strong month for delivery volume, and we see the smallest open interest on First Notice in at least 18 months. Similar to silver, metal has been leaving Comex vaults at a very fast rate.

What happened? I think that supplies at the Comex in both silver and gold are starting to get very thin. I think gold is just starting to get where silver was several months ago. I also think supplies are even thinner than what is reported on their daily inventory file. This is probably behind the increased usage of vehicles known as Exchange for Physical (EFP) and Exchange for Risk (EFR) in silver. Silver EFR activity can be seen below. There is a significant increase in recent months. Comex explains EFR on their website as “A position in an Over-the-Counter (OTC) swap or other OTC derivative in the same or related instrument for a position in the corresponding futures contract.” With the first benefit listed as: “Add convenience of private negotiation”. The Comex describes it as “Straightforward trading method for parties with complementary objectives”. Hmm – that seems very not straightforward if you ask me. But it does seem like a way for people to do deals off the exchange in order to not move the price… maybe!

So where does this leave us?

I think the recent downward delivery volume trend in gold is following a similar path silver took earlier this year. As supplies got very thin, delivery activity ceased. Why? Maybe to not draw attention or perhaps because some major players simply left the market. Who knows?!

In recent months, Registered supplies have been getting very thin in silver hence the need for increased EFR transactions. If gold follows silver, then we should see a similar EFR increase in gold in future months. Could something in silver (or platinum) break before then? Time will tell! We Are Hurtling Toward Stagflation

Comex Results: May is Quiet, but June Looks Strong in Both Metals 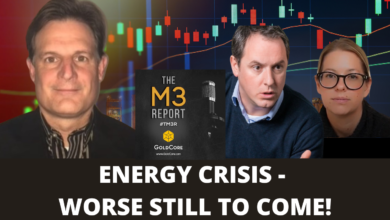