Peter Schiff joined Liz Claman and Andrew Brenner of NatAlliance Securities to talk about the December Federal Reserve meeting and the messaging from Fed Chair Jerome Powell. Peter said investors need to understand that the game has changed. Inflation isn’t going away.

Brenner started off the segment by saying that the Fed is “awful in its projections,” and while it may try to raise rates again, he wants to see the next CPI number, adding, “I really think the Fed is well over their skis.”

Peter noted that Powell said raising rates may cause some pain, but the American consumer would feel more pain if the Fed failed to act and let inflation run out of control.

Well, I’ve got news for the consumer; inflation is already out of control. The Fed failed to act. In fact, the actions of the Fed created the inflation. And it’s going to get a lot worse.”

Inflation is what’s causing wages to rise. Wages are just the price of labor, and prices are going up. Eventually, the Fed is going to stop fighting inflation when the recession gets much worse, and in fact, when it becomes a financial crisis.”

Liz said the Fed has been in a months-long firefight against inflation. “Do you not see any improvement in what we have seen when it comes to inflation at least ticking downward a bit?”

You’re always going to see an ebb and flow. But in order to really fight inflation, we would not only need much higher rates than the rates we have right now, because rates need to be enough above inflation to encourage savings again, and our savings rate is basically at a record low — and consumer borrowing is at a record high. So, that is not helping. But also, government spending continues to increase. Budget deficits continue to rise. You’re not going to fight inflation unless you get cuts to government spending.”

The central bank has even conceded this fact in a paper published by the Kansas City Federal Reserve Bank. In a nutshell, the authors argue that the Fed can’t control inflation alone. US government fiscal policy contributes to inflationary pressure and makes it impossible for the Fed to do its job.

Everything is screaming more inflation, not less.”

Brenner countered that the money supply is coming down, we’re seeing signs of economic slowdown, and price inflation is easing in some sectors. He thinks the Fed is going to back off from where their rate increases are projected to end.

Peter said investors need to recognize that the game has changed.

We’re going to be living in a high-inflation environment for the foreseeable future. Rates are not going back down to zero, but they’re still going to be negative in real terms. You have to invest in real businesses that actually have earnings and pay dividends.”

Peter also emphasized that the decline of the dollar is going to kick into a higher gear when the Fed does stop raising rates because the economy is too weak and the central bank has bigger things to worry about than inflation.

During the Fed meeting, Powell did say that the central bank will begin to hike at a slower pace in order to “feel its way” forward. Brenner said he thinks Powell realizes he has moved “too far, too fast.” He also said, “there’s a big mistake out there waiting to happen.”

Peter said he agrees the Fed is going to ease, but that will be a mistake.

It hasn’t gone far enough. The problem is it left interest rates too low for too long. It already expanded the money supply so much that we haven’t even had enough price increases to catch up with the previous expansion of the money supply. So, even if [the money supply] is growing more slowly now, it doesn’t matter. There is so much inflation already in the pipeline. And the only thing that was keeping our inflation rate lower was the fact that the dollar was rising when everybody thought the Fed would quit hiking. But now that the dollar is falling, that is going to add fuel to the inflation fire. I think it’s going to burn a lot hotter in 2023. But the economy is going to cool off even more as inflation heats up, and that is a no-win situation for the Fed, and for the country, unfortunately.” 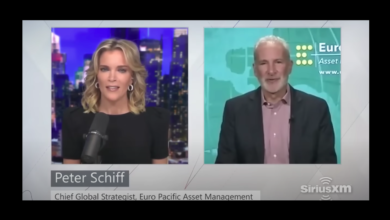 Peter Schiff and Megyn Kelly: The Biden Economy Is a Mess

Peak Inflation Still Ahead as 97.5% of the CPI is Above the 12-Month Average