People keep saying the economy is fine. We’re not in a recession. There’s nothing to see here.

The S&P Global Composite Flash PMI Output Index fell to 47.3 in October. That was down from a reading of 49.5 in September.

A reading below 50 indicates economic contraction in the private sector.

According to S&P Global, it was the second fastest rate of decrease since 2009 with the exception of the initial pandemic period.

The US Manufacturing PMI dropped into contraction territory with a reading of 49.9. That was a 28-month low.

The US Services Business Activity Index tanked even worse, falling to 46.6. That was down from 49.3 in September signaling “an acceleration in the decline in business activity to the second-fastest fall in almost two-and-a-half years.”

Firms linked the decrease to weak client demand and the impact of inflation and higher interest rates.”

According to S&P Global, new orders also returned to contraction territory in October.

The decrease in new business was only marginal, but was broad-based as manufacturers and service providers alike recorded weaker client demand.”

The decline was led by a downward lurch in services activity, fuelled by the rising cost of living and tightening financial conditions. While output in manufacturing remains more resilient for now, October saw a steep drop in demand for goods, meaning current output is only being maintained by firms eating into backlogs of previously placed orders. Clearly, this is unsustainable absent of a revival in demand, and it’s no surprise to see firms cutting back sharply on their input buying to prepare for lower output in coming months.”

Williamson warned that the PMI data signals a fourth-quarter contraction even if we see a predicted GDP rebound in Q3.

The surveys, therefore, present a picture of the economy at increased risk of contracting in the fourth quarter at the same time that inflationary pressures remain stubbornly high.”

This is very difficult for the Fed because they are hiking interest rates into a weakening economy.”

It’s clear that tightening monetary policy is starting to weigh down the economy. Schiff recently said the central bank is between a rock and a hard place, and it’s going to have to make a hard choice – inflation or economic implosion.

It appears the choice may have already been made. Schiff said he thinks the Fed is folding and doing a soft pivot.

If it doesn’t want to avoid a complete economic meltdown, the Fed will have to do a hard pivot sooner rather than later. Economist Nouriel Roubini agrees with Peter Schiff that central banks can’t do what’s necessary to win the inflation fight. 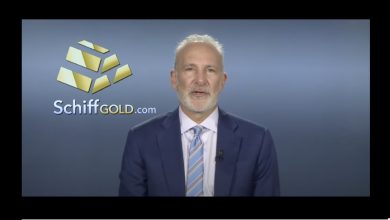 Peter Schiff: Why Shouldn’t You Give Up on Gold and Silver?