“How did you go bankrupt?”

“Very slowly at first, and then very quickly?”

The data shows the Comex is in the middle of experiencing a run on their vaults that is really taking its toll and continuing to accelerate. If you read no further in this analysis, first just take a look at Figure 7 and Figure 18 – those two charts will tell you everything you need to know about the impact of the vault exodus.

Before we jump there though, let’s go through the standard monthly data. While this looks relatively small compared to past minor months, there are two things to note. First, heading into close, the open interest was surging (red line below). Typically, open interest falls as contracts roll into the close, but in November, contract holders were increasing their position as they looked to take ownership of physical metal.

Not shown below was a very late increase in October net new contracts, which further lends credit to the very recent demand for physical. The second thing to notice is that open interest is still relatively high (2,301 contracts) and the volume of net new contracts has been increasing lately (red bar). This means that November is just getting started. Given the strength into the close, it’s likely November will also see high volume of mid-month contracts (these are contracts added within the month for immediate delivery). On the first day, 40% of contracts were delivered which is fairly standard. While delivery volume has been strong and even increased (delivery means a change of ownership within a Comex vault), the real action has been in metal leaving the Comex system entirely. This can be seen below by the steady removal of metal from the vaults.

I keep waiting for this to slow down or even reverse… but it just keeps going drip, drip, drip out of the vault daily. This is where things get interesting. December gold is a major month. Compared to recent major months, the open interest is slightly below average. This might have to do with Managed Money fleeing the market (see forthcoming CoTs report). However, if we change the perspective and account for the gold leaving Registered, the chart looks very different. All of a sudden, the open interest is well above recent highs as a percentage of Registered gold. December is way above the previous major months which shows just how much metal has actually left the Comex system.

Delivery volume in major months has stayed strong. December could be another strong month, putting further strain on the system. Finally, the chart below shows the spread between December and February. The market is in Contango which signals traders betting on the price of gold going higher in the near term. I have been saying for several months that the silver market looks dead. This could be by design. Back in February the market saw a major outlier event where the data changed in a big way overnight to adjust down contracts standing for delivery. Ever since then, the delivery volume has collapsed (chart below) while the exodus of metal leaving vaults has increased (Figure 16). In the figure below, only 11 contracts were delivered on the first day. This is mainly due to the weak open interest coming into the close. Even with the majority of open interest remaining, November will be a tiny month. Despite the small number of contracts open, only 5% were delivered on the first day. The bank house accounts have seemingly left the market. After being very busy for months, they have all suddenly stopped participating. It could be that October and November are just quiet months historically. Or it could have something to do with the chart below, where silver has been absolutely pillaged from the Comex vault. The same thing has happened at the LBMA with metal being drained with the data suggesting it is headed over to India.

With such little physical silver remaining in Registered, the banks may be slowing delivery activity because there isn’t much silver left that they can trade amongst themselves. Once again, this is where things get interesting. Looking at December open interest does not make anything stand out. From this view, it confirms everything above, interest in the market has waned and we now sit at one of the lowest open interest points for a major month in two years. Now let’s turn the kaleidoscope and change the Y axis to contracts as a percentage of Registered. Look at that chart and try to tell me this game has not changed. The next highest line below is September 2022. Look at how much higher December is in just three months. Comparing the chart above with the one below shows how much impact the depletion of Registered has made on the market. Even with the delivery trend slowing in silver (pictured below), it won’t take much to squeeze this market. Every day, very consistently, Registered metal is leaving the Comex system. Delivery between parties is slowing while the exodus of metal is accelerating. Perhaps this is why the futures market is now in the strongest contango in two years, shown below (anticipation of higher prices in the futures), while the spot market (following chart) has been in backwardation since July when the Registered outflow really picked up steam. Backwardation in the spot market expresses a higher demand for physical over paper futures. As the forthcoming CoTs analysis will show, the normal market participants (i.e., Managed Money) are playing the same game as usual. Short futures when the Fed is hawkish and go long when the Fed turns dovish. Historically, the paper market dominates the price. The problem though is that the paper market and physical market are diverging.

Unless the Comex gets a major influx of silver soon, silver and gold available for delivery will be all but gone. A recent article even suggests that the situation may be even more dire than what’s pictured above. When this happens, anyone holding a short contract that is asked to deliver physical will find themselves in a very tough position. Cash settlement might work for a few months, but eventually, people will see the farce.

The Comex was established to try and stabilize prices and allow traders to enter the market and gain exposure to physical metal using paper contracts. Like a regular fiat currency, this all works wonderfully until the day it doesn’t. If the Comex is unable to deliver physical gold and silver to back up the paper markets then it could put the entire system at risk. At that point, the premium for physical metal could explode upwards (I am talking raw bars and not just coins). Getting physical before that happens could be very rewarding. 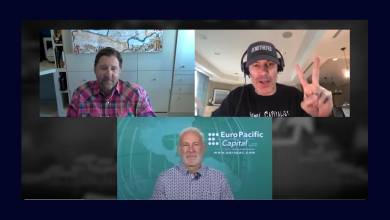 Peter Schiff and Brent Johnson Debate: Will the Dollar Rise of Fall in 2022?