In August, revolving credit increased by a staggering 18.1% as total consumer debt surged to a record $4.68 trillion, according to the latest consumer credit data from the Federal Reserve.

Total consumer debt increased by $32.2 billion in August, an 8.3% increase on an annual basis. That was well above the $24 billion projection.

In July, it appeared debt growth was cooling slightly, but the August data showed a big jump from July’s 6.8% increase.

The Federal Reserve consumer debt figures include credit card debt, student loans, and auto loans, but do not factor in mortgage debt. When you include mortgages, US consumers are buried under more than $16 trillion in debt.

US consumer debt grew by an average of over $31 billion per month through the first eight months of the year.

Americans are burning up their plastic in order to make ends meet in these inflationary times. Revolving credit, primarily reflecting credit card debt, rose by another $17.1 billion in August. To put the 18.1% increase into perspective, the annual increase in 2019, prior to the pandemic, was 3.6%. It’s pretty clear that with stimulus money long gone, Americans have turned to plastic in order to make ends meet as prices continue to skyrocket.

Meanwhile, average credit card interest rates have eclipsed the record high of 17.87% set in April 2019. The average annual percentage rates (APR) currently stand at 18.45%. That’s up from 18.03% just a month ago.

And it appears that the Fed isn’t finished raising interest rates. This is bad news for Americans depending on credit to pay their bills. With interest rates rising, Americans are paying higher and higher interest charges every month with minimum payments rising. With every Federal Reserve interest rate increase, the cost of borrowing will go up more, putting a further squeeze on American consumers.

As a result, more people are keeping higher credit card balances for longer. According to a CreditCards.com report, 60% of credit-card debtors say they have been in credit card debt for at least a year. That’s up from 50% just one year ago. The number of people in debt for over two years also increased, from 32% to 40%. According to Bloomberg, “With inflation exceeding wage gains, more households have relied on revolving debt.”

By and large, the mainstream doesn’t fret over growing consumer debt. In fact, many mainstream reports will tell you credit card spending is a sign of a healthy economy. A couple of months ago, MarketWatch reported, “How much credit households use is seen as a good window into the strength of the economy. Consumers tend to borrow more when times are good and cut back when the economy is weak.” Meanwhile. Fed chair Jerome Powell keeps telling us that “households are in very strong financial shape.”

But some people in the mainstream seem to be getting concerned about the growing level of debt. After the August data came out, Marketwatch reported, “Some experts are alarmed at the pace of growth in consumer credit and think that households are using expensive debt to keep spending with inflation so elevated.”

And it is clear that Americans are laboring under the growing debt load, along with rising prices. According to a recent report by LendingTree, 32%  of Americans have paid a bill late in the past six months, and 61% said it was because they didn’t have the money on hand to cover the cost.

Peter Schiff pointed out in a tweet that the spiraling level of debt has even deeper roots. It was intentionally incentivized by the central bank. 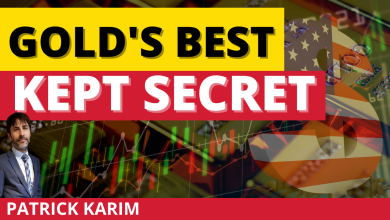