Inflation and rapidly spiking prices aren’t just a problem in the US. It’s gotten so bad in Europe that that perpetually dovish European Central Bank (ECB) has been forced to go hawkish.

But not really. Just hawkish for the ECB.

Last week the ECB raised interest rates for the first time since 2011. The bank surprised markets, raising all of its policy rates by 50 basis points. That pushes its deposit rate all the way to — zero.

The ECB entered the world of negative interest rates in mid-2014 and held the deposit rate below zero for nearly 8 years.

After decades of easy money, the ECB is unsurprisingly (if you understand monetary policy) grappling with spiking prices. In the 19-country Eurozone, the CPI hit 8.6% in June and looks to be well on its way to double digits. The situation is even worse when you look at the individual countries in the eurozone. Nine of the 19 member states already report a CPI of 10% or more, topping out with Estonia at 22%.

This is a direct result of more than a decade of easy money policy by the ECB. WolfStreet called the European bank “the most reckless central bank among developed economies” due to its willingness to sit on an “idiotic” negative interest rate policy and continue money printing “even as inflation was raging and spiking and spiraling out of control.”

Most of the other big central banks have already taken some steps to tighten monetary policy, including the Federal Reserve, the Bank of Canada, the Bank of England, and the Swiss National Bank. Japan remains a major holdout, with the Bank of Japan has actually doubled down on easy money.

While the mainstream might label the ECB a “hawkish” move, it’s obviously not in the big scheme of things. Zero percent interest rates hardly qualify as a tight monetary policy. As Ryan McMaken at the Mises institute put it, “With a policy interest rate just now getting back up to zero, what the ECB is doing is not ‘normalization.’”

And on top of that, the ECB plans to continue quantitative easing, rebranded as the “Transmission Protection Instrument” (TPI).

Keep in mind that eurozone countries can’t print money. They surrendered that privilege to the ECB. That means they are at the mercy of the market to finance their individual spending sprees. As WolfStreet explained, ” One way for the currency union to break up would be for a fiscally “weaker” country, such as Greece, Italy, or Spain, to lose the confidence of the markets, and be confronted with spiking yields on their sovereign debt, to where those countries have trouble borrowing new money to pay off maturing debts and fund the current deficits and interest payments, while yields on German debt would remain relatively low.”

The ECB’s only official mandate is to keep inflation at 2%. But it has been pursuing a stealth mandate of holding down the spreads between bond yields in various eurozone countries. It has to in order to hold the union together. To that end, the ECB will buy Greek, Spanish and Italian debt to artificially lower their yields and keep the spread between these weaker countries and stronger countries like Germany small enough to prevent unrest.

As one analyst told Yahoo Finance, this really doesn’t make any sense.

Quantitative easing is easing and raising rates is tightening. They’re basically trying to do two things at the same time.”

In his podcast, Peter Schiff said there’s no way the ECB can meet its inflation goal and keep a lid on these yield spreads.

If the ECB truly wants to fight inflation, then it can’t do that asset purchase program. It’s going to have to keep raising interest rates and that means countries like Italy are going to have to pay much higher interest when they borrow money than a country like Germany. Now, there is no way around that. Lagarde wants to pretend like they have some way of controlling the spread, but really, it can’t be done. If they are going to meet their inflation goal, there’s no way it’s going to happen if they keep printing money to buy Italian bonds, or Spanish bonds, or Greek bonds. They’re going to have to get out of the quantitative easing business.”

McMaken argued that even with the rate hike and talk of more interest rate increases down the road, “not much has really changed at all.”

The ECB appears to be taking a page from the Fed’s playbook in trying out some of the weakest moves toward monetary tightening and just hoping against hope that this will rein in price inflation without causing a painful recession.  This approach, however, is likely to place the ECB even further behind the curve on addressing the price inflation in fueled by vast amounts of monetary inflation employed to prevent an economic implosion during the covid lockdowns.”

And of course, as McMaken alludes to, with this sudden tightening in monetary policy, Europe will now face the same problem as the US — the potential for a deep recession.

It will be interesting to see how these ECB moves will impact the dollar. With the Fed tightening earlier, the dollar has strengthened considerably against the euro. Earlier this month, the dollar reached parity with the European currency. If the ECB follows through with more tightening, we could see relative dollar weakness. Schiff said he thinks we could see short-term bond yields in the Eurozone higher than in the US by the end of the year. 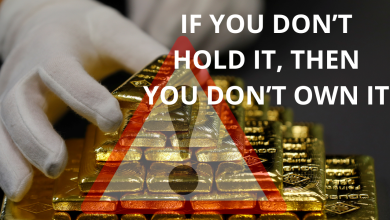