Walmart recently announced better-than-expected third-quarter sales growth. This may seem like great economic news until you realize the reason behind the retailer’s big jump in sales.

As it turns out, wealthier shoppers are flocking to Walmart to make ends meet as rising prices squeeze pocketbooks.

In its earnings report, Walmart said it is making “strong grocery share gains, including from high-income households.”

“Customers who came to us less frequently in the past are now shopping with us more often, including high-income customers,” Walmart CEO Doug McMillon said on a Tuesday call with investors and analysts.

Why are more affluent people shopping at Walmart? In a recent podcast, Peter Schiff said it was out of necessity.

It’s because they can’t afford to shop at the more expensive, fancier markets that they used to go to because prices are up so much, in order to put food on their tables, they’re having to trade down and buy cheaper stuff at Walmart.”

According to CNN, other discount supermarkets, along with Dollar General, reported gaining new, wealthier customers trying to manage budgets during these inflationary times.

While the CPI came in lower than expected in October, food prices continue to rise. The price of food at home increased by 0.6% month-on-month. Food at restaurants was up 0.9% on the month. Annualized, food prices were up nearly 11% in October.

Pundits and analysts like to look at core inflation, stripping out more volatile food and energy prices to gauge inflation, but consumers don’t have that luxury. They can’t just cut food out of their budgets, and Americans are struggling to cope.

Increased spending on food is forcing consumers to cut in other areas. Walmart’s third-quarter report hints at this. While grocery sales increased in the “mid-teens” last quarter, the company reported “softness in discretionary categories including electronics, home, and apparel.”

Tight budgets aren’t just altering shopping behavior. It is also forcing people to dig deeper and deeper into debt. Household debt increased at the fastest pace in 15 years during Q3, as American consumers ran up their Mastercards and Visas month after month. Credit card balances surged by 15% year-on-year in Q3, increasing by $38 billion between July and September. That was the biggest annual increase in credit card debt in more than two decades. Rising credit card debt coupled with increasing mortgage costs pushed overall household debt higher.

Economists and pundits talk about inflation as an academic exercise. They rarely reflect on the fact that rising prices have real impacts on real people. After months of rising prices, even wealthier Americans are feeling the pain. And if you happen to be somebody living on a fixed income or savings, you’re really screwed as inflation is rapidly eating away your purchasing power and your income streams aren’t increasing at all. Inflation always causes the most pain for the poor and elderly. 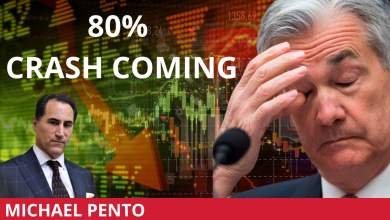 Treasury Scrambles to Lock in Rates as Borrowing Cost Soars

Are Gold and Silver Approaching a Tipping Point?