There are a number of signals that the US economy is getting weaker even as inflation gets stronger.

In other words, we are hurtling toward stagflation.

Target announced plans to cancel orders from suppliers and slash prices to clear out amassed inventory. Why? Because consumers aren’t buying their stuff – particularly hardline goods such as clothing and home goods.

Why have revenues at Target and other retailers plunged, even while retail sales numbers have remained strong? In a nutshell, consumers are paying more and getting less.

First, people simply don’t have any money left over after paying for essentials such as gasoline and food.  Second, everything more expensive. Retailers are getting hammered by higher costs.

Some people have concluded that there is a silver lining in this. If Target plans to cut prices to move inventory, that means inflation should come down. That’s the wrong read. These price cuts will only be temporary. In the future, Target won’t carry as much inventory. That means once they blow out this inventory, what’s left will be much more expensive.

Meanwhile, in order to make up for lost revenue on clothing and housewares, Target will likely have to raise prices on the thing it is selling – food.

And at some point, Target will have to begin cutting jobs.

Another storm that’s brewing is the impact of declining inventories on GDP. Inventory builds pump up GDP in the here and now. Inventory declines will suppress GDP moving forward. In fact, the Atlanta Fed just downgraded its Q2 GDP estimate to 0.9%. That would mean a 0.7% contraction in GDP through the first half of the year. This undercuts the Federal Reserve narrative that it can fight inflation because “the economy is strong.”

American consumers are straining under rising prices. To make ends meet, they are turning to credit cards and depleting savings. Consumer debt has risen to record levels, while the savings rate has plunged to the lowest level since 2008.

These numbers prove that everything Joe Biden said last week about a strong economy and US consumers being in great shape was wrong. Consumers are in desperate straits. They are tapped out. Whatever savings they managed to accumulate during the pandemic when the government stuffed their pockets with stimulus money is gone. Now they’re maxing out their credit cards. And what are they buying? They’re only buying the necessities – food, energy, shelter. There is no money left for discretionary spending. This house of cards economy is on the verge of a collapse.

The trade deficit further reveals just how hollowed out the US economy has become. While the $87 billion trade deficit was lower than projected, it was still an extremely high number and on a year-on-year basis, it set another record. This indicates just how completely unbalanced the US economy has become. Decades of artificially low interest rates have incentivized speculation and consumption, and disincentivized savings – the key to capital accumulation. As a result, there has not been enough investment in plants and equipment.

All of this data points to one thing – inflation is putting a massive drag on the economy. And there is no sign that inflation is about to abate.

Government officials, central bankers and talking heads on CNBC can talk about a “strong economy” until they are blue in the face. The data says otherwise. It’s screaming stagflation.

Even the mainstream is starting to worry. The AP recently ran an article headlined “Worry About Stagflation, a Flashback to ’70s, Begins to Grow.” And the World Bank also issued a warning.

The world economy is again in danger. This time, it is facing high inflation and slow growth at the same time. … It’s a phenomenon — stagflation — that the world has not seen since the 1970s.” 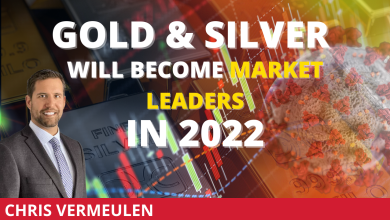